A Bride’s Story is my favorite manga. I’m no expert on manga, but even if I read three volumes of Naruto  a day, I’d probably still think A Bride’s Story was the best manga ever made. It’s beautiful. It’s sumptuous. It’s intimate. It’s–everything.

A Bride’s Story opens on its first page with a jaw-dropping illustration of Amir, a young woman who has come from a nomadic tribe to marry Karluk, the twelve-year-old son of a wealthy merchant family. Set in Turkic Central Asia during the 19th century, everything immediately looks like nothing you’ve seen before, from the homes to the outfits and people. Amir, dressed richly as a bride, is a little old to just be getting married, and Karluk a little young, but it’s not an unfit match in their world. Now that they’re married, and forever tied to each other, Amir and Karluk must come to know each other and work through the many trials, big and small, that come with daily life. 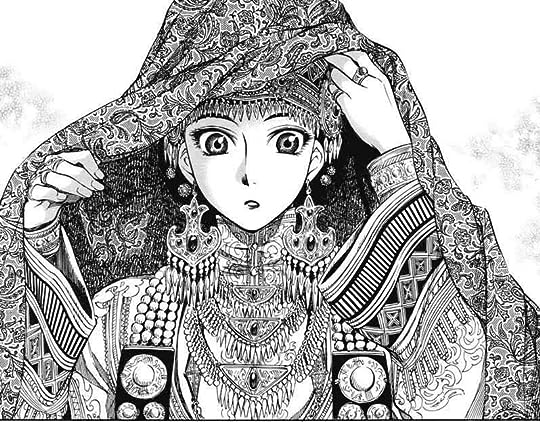 The first image from the first page, as Amir meets Karluk for the first time.

Kaoru Mori, the Japanese mangaka (artist-illustrator combo) behind A Bride’s Story, is as foreign to central Asia as I am, but the story she weaves is full of life, history, and intimacy. Too often, historical stories, especially those told about ways of life that have faded in the face of Westernism, are oversimplified versions, glorifying the idea of the “proud native” without examining their culture from within. It can also overlook the fact that these cultures very often have lived on, making them feel like ancient relics rather than the past of a current society. Kaoru Mori doesn’t have these problems. The world she spills across the page in black and white feels full of colors, smells, sounds, and feelings. Simply the way she draws embroidery makes it seem as if you could touch the page and feel each thread. She brings characters into vivid focus in a way that feels so easy that it must have been, in fact, very difficult. She builds a world that it is effortless to feel enchanted by and hard to leave, because nothing else you know is quite like it. This manga is ultimately a daily-life drama, drawing on the lives and troubles of women in that time and place to make its story. These are the type of women we’re used to seeing portrayed as barbaric, or oppressed. We have been given the idea that their cultures have been cruel to them, that they have lived pointless lives of household obligation for centuries, and proving this wrong is the crux of A Bride’s Story. These women do cook, and clean, and sew, but it is not all they do, and there is no indignity in the fact that they do it. This novel draws back the curtain to complicate the idea that cultures with traditional gender roles have always strictly obeyed them, or that these cultures held women back. Amir, the central character, is a tribal woman who has come to live in town; she is able to hunt, ride, and use a bow and arrow, which the women in town have never had to learn. (Neither have the men, for that matter.) While Amir’s non-traditional qualities shake up the people in town, they understand why she had to learn this in her tribe, and value her skills for their ability to bring food to the table and defense to their homes. When Amir’s tribe tries to get Amir back for a different, more advantageous marriage match, the entire town comes to her defense. Because she is part of their families now, and she can’t be taken back. 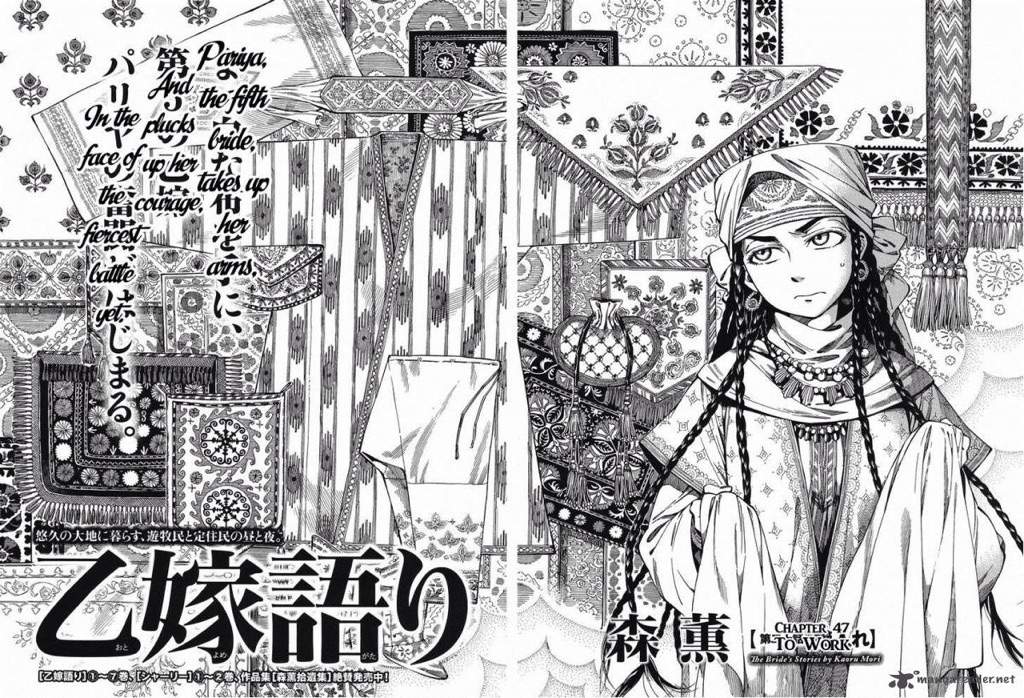 A Bride’s Story doesn’t just follow Amir, roaming to focus on brides in various settings. Laila and Leily, two twins living on the coast, look to find husbands who can make them rich beyond their wildest dreams. Talas, a woman who has been widowed many times, gets the bulk of volume three to tell her story, and it is heart-wrenching. Anis, a wife in Ankara, finds herself loved but wistful for female companionship. (While not explicitly LGBT, it’s pretty much only not LGBT simply because the characters themselves wouldn’t see it that way. By any modern standard it’s hella gay.)  Throughout all of the volumes, Pariya, Amir’s closest friend, wishes desperately for love, but may be too hotheaded to ever attract a husband. 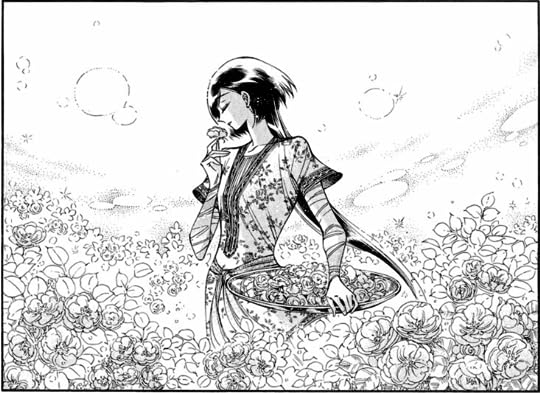 These women are diverse, coming from a range of cultures and with a range of outfits. While their concerns mostly focus around romance and family, they are all very different women with their own stories to tell. A Bride’s Story never pretends that men and tradition aren’t problems; they are fully acknowledged as such. But the lives they lead are more complex than that; some struggle more directly against men, but some are the equal to the men in their household, and instead struggle with children, growing up, going to the public baths, or the looming threat of Russian invasion. Their lives are neither uniform nor simple, and they are all the more beautiful for it. 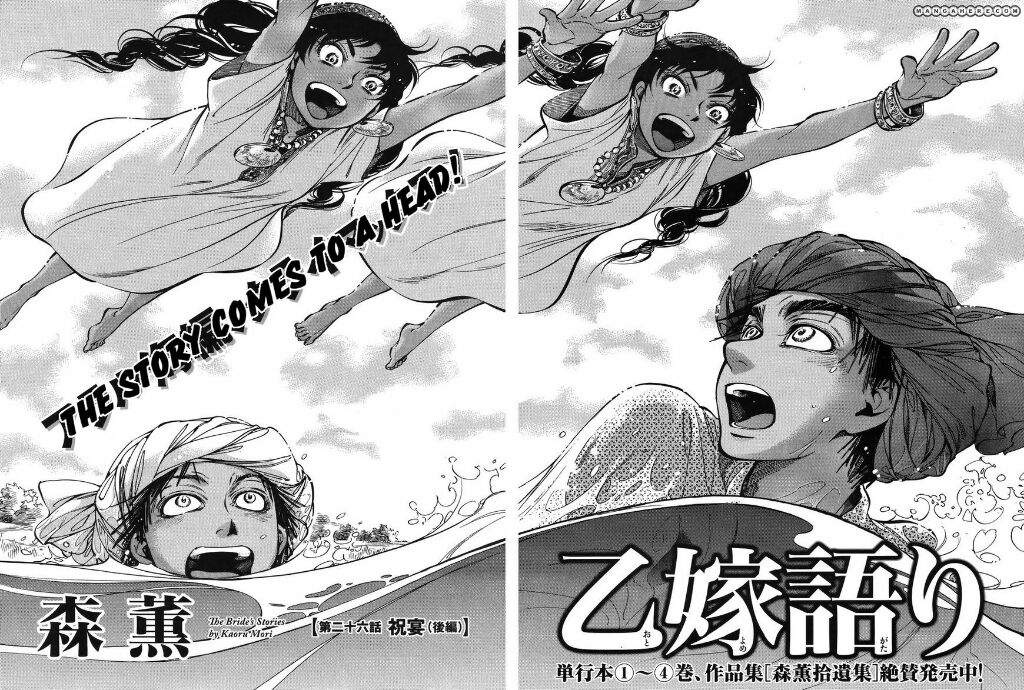 Look, it may be becoming increasingly obvious that I am a total, non-critical fangirl for A Bride’s Story. And it’s true; I’m pretty devoted to this gorgeous manga. But I think it’s earned my loyalty. These are beautiful, lush, complex stories, portraying a culture that I’ve never had the chance to get to know in a way that’s detailed and fair to their way of life. It seeks to bring dignity to the past, to elevate it and to complicate its narrative. A Bride’s Story seeks to bring value to the history it tells, and to bring value to the women of the time period.

A Bride’s Story currently has nine volumes in English, published by Yen Press. They’re beautifully bound and relatively expensive per volume, which was why I asked my local library to stock them. The library opted to place them among adult fiction, which is fair; there are a decent amount of boobs, and mature themes. If you’re intrigued, or you know someone who would be intrigued and is mature enough to handle it, I highly recommend you look into picking these up in some form. I guarantee that you won’t regret it.

Unless you somehow hate amazing stories about women. Then I think you might need to go to another blog.

Got any questions, comments, concerns, rubber chickens? Comment or hit me up on Twitter. All art originally by Kaoru Mori.