In this review series, I’ve been reading all of Tamora Pierce’s Tortall books. In this post I’ll be going over Emperor Mage, the third book in the Immortals quartet.

This book is definitely my favorite out of this quartet–the lush setting, the complex intrigue that doesn’t bog down plot progression, and the wide range of animals make this an exemplary book, showing off the best of Daine and her companions. Emperor Mage takes Daine out of her comfort zone to the barren, troubled shores of Carthak. I promised in a previous post to talk about Carthak’s relationship to Egypt and whiteness in nobility, so let’s start with that.

The race of ancient Egyptians is a huge, contentious, controversy. That Wikipedia link is good at covering the whole debacle, but to sum it up: when Egypt and its artifacts became a huge fad in Victorian England, there was a bit of a choice made to depict the pharoahs and other Egyptian nobility as lily-white. Victorian scholars, you see, were pretty convinced that “savage” (non-white) cultures needed to have civilization brought to them by the British empire, so the idea that the ancient Egyptians could have been black or brown was absurd–totally outside of anything they thought they knew. It didn’t help that the ancient Egyptians depicted themselves as lighter-skinned than other African people in their murals, and that the last three hundred years of pharoahs had Greek ancestry, including none other than Cleopatra, and Egypt was a major power, so it was a bit of a melting pot. The fantasy of ancient Egyptian whiteness had enough fuel to spark a notion that continues to this day. Whitewashing of history happens a lot–see the Bible–but there’s a particular resistance to labeling ancient Egyptians as African or people of color, even the ones whose ancestry was entirely African. Ancient Egyptians were most likely much lighter-skinned than, say, their cousins the Nubians, but proving that they were people of color is still a surprisingly contentious task. 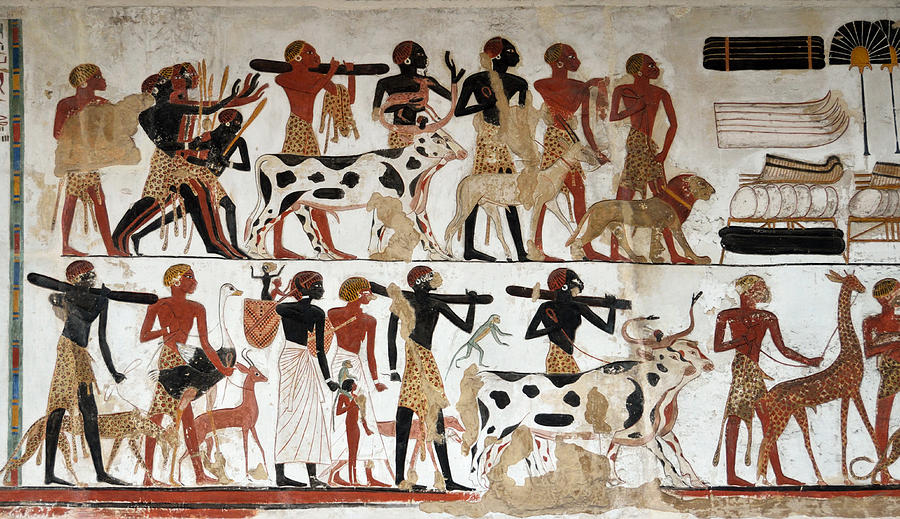 Here we see art depicting red-skinned Egyptians alongside Nubians, who Egyptians saw as an inferior civilization. Victorian scholars used similar art as an excuse to be super duper racist.

Ancient Egyptians depicted themselves as red in color, but this was meant as a metaphor, to show the life and vitality of Egyptian men. The skin color of Egyptians was likely highly varied, just as skin color is varied in Egypt now–it is and was a world center of trade and commerce. But the common idea of Egyptians as exclusively light-skinned, and specifically as European-seeming, is short-sighted and sort of willingly ignores the idea that many, if not most, Egyptians would have been ethnically African.

The first Night at the Museum movie has an Egyptian, Rami Malek, playing a pharoah, which is awesome and sadly, kind of a new thing.

The Carthaki Empire of the novel is based on a combination of ancient Egypt, Greece, and Ancient Carthage (a Phoenician kingdom that has its own Gordian knot of race issues in scholarship), but mostly, it draws inspiration from Ancient Egypt. Emperor Ozorne and his heir, prince Kaddar, are described as wearing short tunics, sandals, and rich fabric wraps, along with jewels on every arm, finger, toe, wrist, and ankle, along with ear and nose piercings. Both are described as wearing thick necklaces–Kaddar’s is specifically “collar-like” (page 18 in my Randomhouse paperback edition). When Kaddar greets the Tortallan convoy at Thak’s Gate, he is described as wearing “a crown like a cap, one covered with diamonds” (p 16) and “holding [a] blue stone rod and gold fan crossed on his chest” (p 20). Along with the immense capital city straddling a river, the statues of emperors mentioned, and the prevalence of gold, Egypt is the biggest source Pierce is calling on. She’s making strategic changes–Egyptian pharoahs carried a crook and a flail crossed over their chest–but she’s still overtly calling back to Egyptian culture. 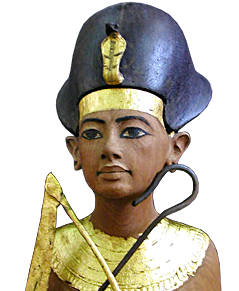 Emperor Ozorne himself is probably intended to be white, or pale-skinned. His nephew Kaddar is mentioned as “a light-skinned black” (p 18) and later mentions his southern father’s dark skin being evident in his own appearance. Ozorne’s own skin is never described, but if he’s lighter skinned than his light-skinned cousin…he’s probably white, especially in the larger context of Tamora Pierce being a white writer in a post-Victorian society. On the one hand, this means the Carthaki Empire is, while rich and interesting, not the best reflection of actual Egyptian history; on the other hand, the book does end with Ozorne turning into a stink monster and his black nephew ascending to the throne. The Graveyard Hag, Carthak’s premiere goddess and a major character here, also doesn’t get an explicit reference to her skin color.

When I read this book as a child, I saw both Ozorne and the Hag as white, in my head, and I think it’s worth mentioning that. There’s been a plethora of studies showing that white audiences see “white” as the standard, and failing to mention skin color generally implies a character is white in Western fiction. Tamora Pierce subverted this herself in “Student of Ostriches,” a short story she wrote later in her career where a black character is slightly disgusted the first time she sees a white man since he looks half-baked. Still, this novel, while rich and interesting in its own right, has an imperfect understanding of ancient cultures and the race politics of historical scholarship. Maybe you didn’t need a whole crash course in that to understand it, but it’s a subject that doesn’t get enough exposure, so I’m happy to overexpose you, my dear readers.

The rest of the novel is, frankly, pretty excellent. Here we see Daine move into the realm of the gods, and not just because she has more personal interactions with them. Daine’s own powers have expanded so much it’s almost funny that she still sees herself as a normal girl. The Banjiku even call her a god, yet she has trouble seeing how much power she wields. It’s cool to see her in possession of so much power, and wielding it so well by pure instinct. Daine demonstrates in this book how destructive her powers can be, and the thing holding her back 90% of the time isn’t a sophisticated sense of the burden of her power. It’s simply that she’s a good person, so she does good things. The way Daine’s morals stand so strongly throughout the books is a real testament to how strong her character has been throughout.

I also really enjoy the political intrigue in this one. Since Daine isn’t heavily involved in the actual politics, she only gets slices of the whole thing, but I think that makes it more intriguing. The vague dread of a nation collapsing pervades this whole book, and what Daine does witness does enough to justify what comes later. I also like that she doesn’t have a good read on Ozorne until late in the book–it betrays Daine’s softer side, that she’s not quite willing to write him off until she’s got proof he’s evil. And on Daine’s softer side, it’s nice to see her maturing relationship with Lord Rikash, AKA Coolest Stormwing.

I didn’t find the side characters as satisfying as on past rereads, however. I loved Prince Kaddar growing up, but I also thought he’d be relevant in another book some day, and I think he only gets one or two more references in the Tortall books. It feels like we just get a glimpse of a blandly pleasant guy, and the other characters are neat ideas, but not a lot of them feel as rich as the characters did in Wolf Speaker. Zek and The Graveyard Hag are the two who feel the most well-rounded.

That climax, though! This is easily my favorite climactic scene so far. It’s so wild and yet so easy to picture, the dinosaur skeletons rampaging through the palace and bringing chaos in their wake. They are Daine’s rage and sorrow writ large, which also allows the book to show her feelings, rather than state them outright. Their impact means so much more knowing that it’s really Daine’s emotions that are ripping the palace to shreds.

This book is excellent. It has its flaws, but it’s an exciting read, and I’m always happy to return to its pages.

What do you think of Emperor Mage? Let’s discuss it in the comments or on Twitter.