The thing is: they’re not wrong. Not exactly right–it can’t be missed that it’s the white male portion of the internet that prefers The Orville the most, and why that might be–but The Orville does, in fact, feel like “real” Star Trek. Even though its characters sometimes drink on duty, use pot freely, and crack wise about sex, the show has a beating heart to it. Seth McFarlane, mostly known for toeing the line between humor and just gross stuff on Family Guy, is actually a really dedicated Trek fan, and in making the show, he didn’t want to make a cynical take on the franchise. His characters, flawed as they are, also struggle to do good in the universe, and are confronted with complex moral questions. The show hasn’t completely won me over (I don’t find the jokes to really be funny), but I was really surprised and endeared by the fact that it wants to go toe to toe with the Star Trek franchise, to match it, not to simply make fun of it until the joke runs itself out.

Parody has a power, to reveal, to dissect–and dissection is also one of the primary powers of fans. When a TV show ends, when a book series concludes, oftentimes, the fan is not yet done with that world. For a series as huge and meaningful as Harry Potter, this is even more true; for some people, Harry Potter is responsible for how they grew up, their perception of themselves. House identities mean something, to a lot of people, because Harry Potter means something, and so Harry Potter has also been thoroughly dissected. Questions, like whether Snape was ultimately a good person, whether Dumbledore was really a good person, the ramifications of things like the clear lack of wizarding social services, have been pulled apart and answered in various ways. The current fan culture invites discussion, argument, and reinvention through fanworks, and so perhaps it’s not surprising that fans who are also professional creators turn to the world of parody to be able to express their own feelings about their favorite franchises. 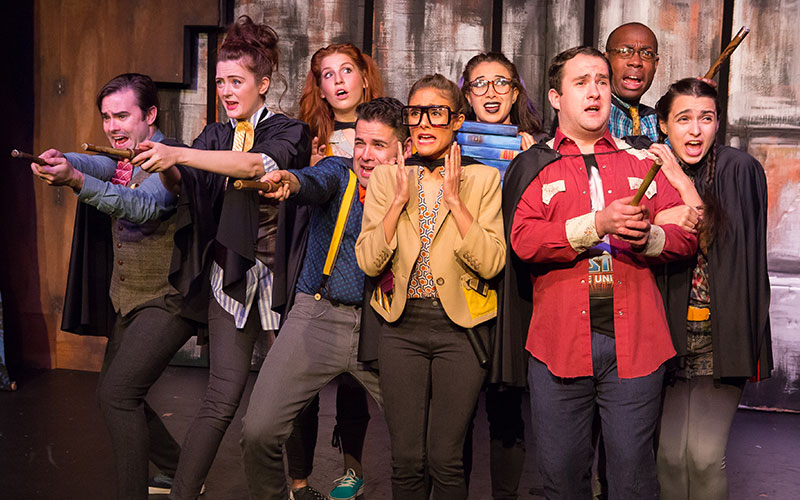 Puffs, or: Seven Increasingly Eventful Years at a Certain School of Magic and Magic, stars Wayne (currently played by Zac Moon), a British-cum-American student who managed to swing a letter to Hogwarts. Flush with the realization that he is magic, ready to start the best years of his life, Wayne gets sorted…into Hufflepuff. Famously the most mocked house, the Hufflepuff house Wayne discovers is full of misfits, ne’er-do-wells, and nerds. Even worse, he’s in the same year as Harry Potter, and having The Boy Who Lived at the same school throws his next seven years into chaos.

Puffs is, in many ways, the definition of a parody. When I saw it in a workshop performance at the University of Florida, there was a repeated joke where the Hufflepuff students, facing danger, would huddle together and chant “WE ARE NOT A THREAT.” Hufflepuff is the house of castoffs, Wayne a typical American teenager. One of his friends, Megan (Julie Ann Earls), is a goth, edgy girl with a Death Eater for a parent. The play, unlike the books, also acknowledges that it takes place in the early 90s, and all the awkwardness that era has in hindsight. When Harry Potter does show up, he’s played by random actors, holding props that represent Ron and Hermione. 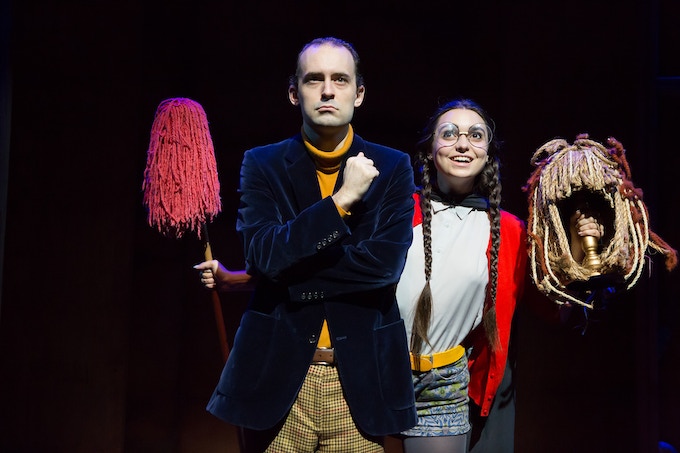 But to label it simply a parody doesn’t really express what it is. As the play goes on, as the books become darker (especially after the events of Harry Potter and the Goblet of Fire), the play also takes a turn. The Hufflepuffs, the house of forgotten kids, suffer their own, fear, losses, and hopelessness in the face of the return of Lord Voldemort. They face their own triumphs as well, with magic, romance, and puberty coming into play. I don’t want to give away too much detail about the play, because you really should watch it yourself (more on this at the end), but the play has many facets. In some ways, it’s very cynical, confronting the fact that people other than Harry Potter might not have had a very good time at Hogwarts when he was there. It’s also a bit of a parody. But it also has a real heart, a real belief in what the books mean and the people they turned us all into. It’s a play written for the children who grew up with Harry Potter, walking through their feelings of humor, cynicism, and most importantly, of love, tempered by the distance of childhood memory.

In Act Two, Scene Five, Harry Potter goes to Godric Hollow, where there’s a statue of him waiting. Harry’s delighted with the statue, only to be devastated when it’s bulldozed and replaced…with a statue of Andrew Garfield’s Spider-Man. He’s offended that he’s replaced, and he’s just as offended that Tobey Maguire, the Spider-Man he cares about, isn’t the Spider-Man being honored. The jovial foreman (Dylan Saunders) working on the new statue can barely even remember Tobey Maguire! When Harry complains, the foreman explains that…these things happen. “Things come and go. Nothing lasts forever, kid; nothing’s built to.” 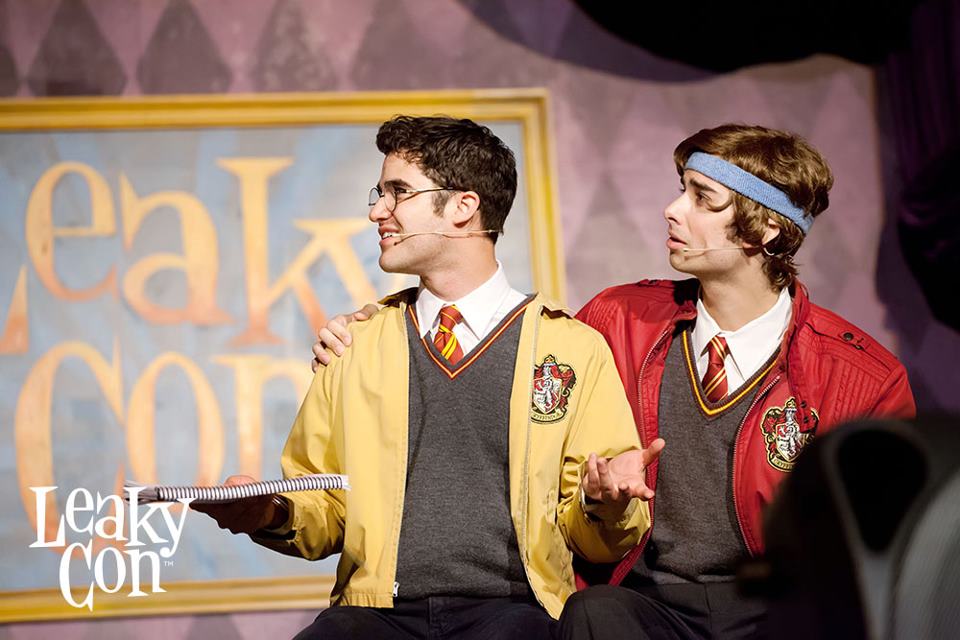 On the surface, this is a hilarious and cynical scene, where Harry Potter obsesses over Spider-Man even as the foreman tears down his childhood home, stating that the “Harry Potter craze” has ended. But this scene is a real reflection of fan fears and feelings. Performed two years after the released of the last film, at a Harry Potter convention called LeakyCon, many of the fans in attendance were…in a state of uncertainty. At that point in time, Harry Potter was supposed to be over, forever, and on top of that, many of us were staring down the barrel of adulthood. (For example, that was the year I graduated college.) It seemed hard to grow up, and much, much harder to leave Harry behind. This scene is incredibly affecting, because it reflects those fears, and also gently points out that there’s nothing we can do to stop Harry Potter from being…a little bit over, even if we keep him alive in other ways.

This is the power of The Orville, Puffs, and of the Very Potter Musical series; when something is created by fans, it can speak to other fans in a way that’s uniquely affecting. It feels real because the creators behind these works have put their heart into these works, to bring their passion to the forefront because they care in a way that’s much more immediate and understandable than the care of an executive producer on a reboot. These things recognize us, the fans, how we feel, what brings us comfort and joy. 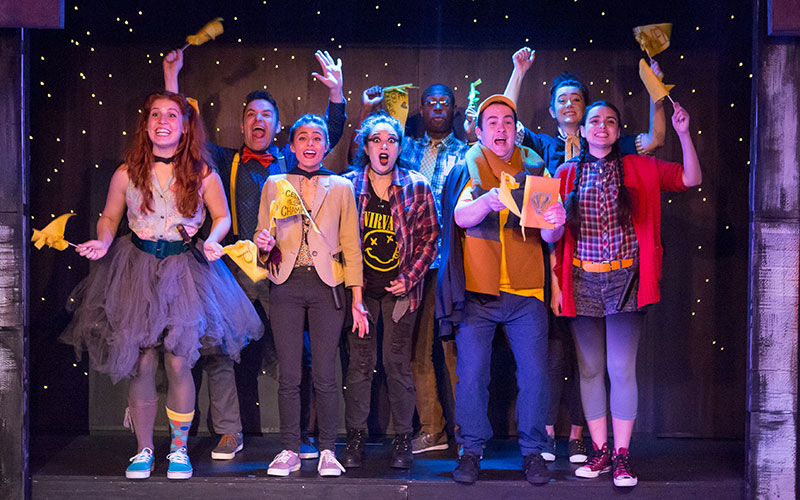 The showrunners, writers, producers, key grips, etc. on professionally-produced content have a set of obligations. Even if they are passionate fans of the thing they are making, they have certain obligations, to the studio, to form, to their creative community. They are expected to do something new, and stick to the rules, and appeal to a wide audience, and appease powerful executives who can destroy what they’ve created at a whim. These influences don’t necesarily mean mainstream media is bad, only that it is not solely beholden to its fans. It cannot, by its nature, be exactly what you want it to be.

Parody, meanwhile, has miles more freedom. Parody is free to rip off, to make fun of, and to appeal to a niche. Parody has the freedom to go to extreme lengths as well as to blatantly whip nostalgia to death with overuse (in a good way!). It can move in the spaces of fan speculation, to acknowledge fan theories and ideas, whereas mainstream media is supposed to sit at a remove from fandom. These barriers have broken down more and more recently, of course, but it’s not like JK Rowling is ever going to write a Harry Potter sequel where Harry goes to a therapist and comes to terms with his experience–and a surprising number of fans would like exactly that book. 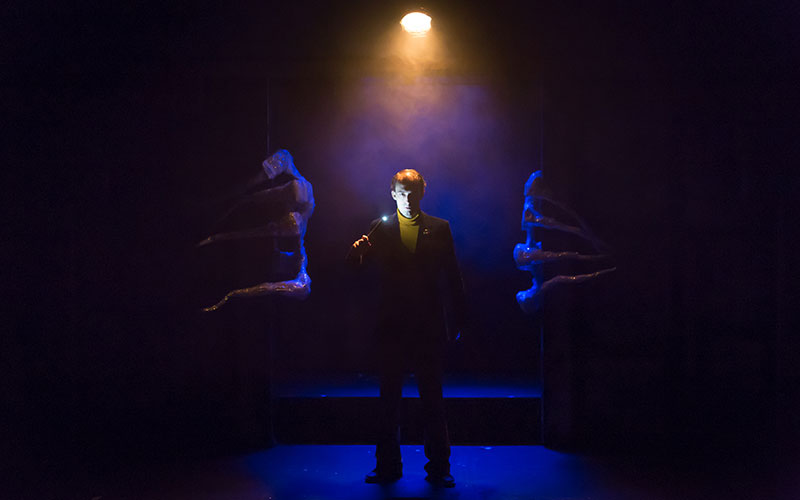 Puffs is a very good, and incredibly moving, play. It is about the Hufflepuffs, the house full of kids who were picked last for sports teams, and it could simply make that joke for a whole play–parodies made by more cynical creators, looking to cash in on the craze for a massive franchise, might make that decision. Instead, it is more. It chooses to explore what it really means, to be an outcast in a world where magic is supposed to fix everything, to be on the sidelines of someone else’s epic story. Puffs chooses to be genuine, to be vulnerable, emotional, and real, and it is a beautiful experience as a result. The press material for Puffs even explicitly asks that it not be called a parody, even though it clearly has its roots in the parody genre. Puffs has played sold-out runs in various off-Broadway theaters for several years now; the best measure of quality is, ultimately, success, and Puffs has been very successful. And perhaps the best recommendation I can make for the play is the fact that, when I saw it, it made me cry, and feel at home for an hour and 45 minutes. Puffs is currently running a Kickstarter so that they can film a performance of the play and distribute it. The Kickstarter ends tomorrow, so if you don’t think you’ll make it to New York anytime soon, you should definitely chip in some money to get the digital download.

Genuineness and generosity of spirit are funny things to look for in parodies, but now that I’ve experienced the potential of a show like Puffs, they seem essential. Being a fan creator, being able to treat franchises as potential for commentary, as opposed to monoliths, has brought beautiful life to Puffs (and made The Orville much better than it really ought to be). I hope to see more things as genuine and heartfelt as Puffs in the future, and if such things don’t arise…well, I backed the Kickstarter, so I’ll just rewatch Puffs.

Talk to the author about how fan creators meet mainstream media, and what that means, either in the comments or on Twitter! THIRD OR NOTHING!