Most photosets are, at their heart, a photomanipulation, typically with some text over it. This is the art form of photoshot, or in my case, of Photoshop’s free, janky little cousin, GIMP 2.0. So you can see in my photoset that I’ve put lyrics from The Runaways’ “Cherry Bomb” over pictures of movie and comic Gamora, of Guardians of the Galaxy fame. I chose to do this because at the time I was listening the Guardians of the Galaxy soundtrack constantly, and I got to thinking about how “Cherry Bomb,” which is used in a suiting-up-to-fight scene in the film, seems particularly appropriate for Gamora. She is a bit of a wild girl–even though she acts very restrained, she’s a trained killer and in fight scenes she is relentless. So I wanted to make a photoset with these lyrics that played up Gamora’s violent, reckless nature–showing how she connects to the lyrics. I settled on manipulating the colors in each photo so that they’re mostly red and yellow, contrasting Gamora’s typical green color scheme and amplifying the violent feeling to her. I manipulated each picture individually, then uploaded them into this photoset, fiddling with Tumblr so that they were in the layout that I wanted.  I put a pithy caption (with song photosets, you generally put the next lyric in the song), and I posted it!

Photosets are less about creating something original than remixing what already exists in order to showcase it in a new light. Photoset creators will carefully darken or lighten images, tint them a certain color, or Photoshop new elements in them. Sometimes it’s to tell a narrative–sometimes the theme of a photoset will be “Thor and Loki are both dads at this daycare,” and the photoset will include screenshots from other films Tom Hiddleston and Chris Hemsworth have done, juxtaposed and with new dialogue added to make it seem like they are meeting each other at a daycare. (This is a photoset I really did see recently, but I’m having a hard time finding it again.) Photosets are often, however, much simpler; they’re about highlighting an emotion or a feeling. Many of them will be scenes from the source material, recreated faithfully, but with color manipulation or other editing that emphasizes a certain aspect of the scene. Maybe they’ll have new words attached (often to reflect the inner life of a character), sometimes even the words will be faithful to the source material, and the photomanipulation alone will tell the story. In a way, photosets are one of the most laser-focused forms of expression. They are all about an aesthetic, remixed, about portraying one or two emotions or ideas within a few pictures. Sometimes the idea is “here are pretty gifs I made from my favorite movie,” which is how much of this started. But it….evolved, into this idea, of expression via images you have no ownership to, except in the ways that you have altered them.

The art form has even evolved. When I was in my Tumblr heyday, they were minimalist, with one large-format image and usually, a little text on it and under it. Now narrative posts have gained a lot of traction, especially ones that mismatch TV shows with quotes from other TV shows. From this post on IncorrectB99; the screenshot is from Brooklyn 99 and the quote originates from The Mindy Project.

Photosets have been a vital part of Tumblr fandom and of Tumblr aesthetic for much of the lifetime of the platform; when Tumblr redid its photoset function and the sizing requirements for photos changed, many photoset makers lost their minds, as their artfully made creations were now squashed into new dimensions. The art of photosets is so precise that sometimes, the text below the photoset will include a link to the photo in higher resolution, because the creator made a more intricate image than Tumblr can faithfully reproduce (their image resolution standards have often been famously underwhelming, which makes it even more amazing that this platform has been the sole purveyor of this photo-heavy medium). It’s an art that’s changed and refined over time, just like many types of art. See #bookstagram, or Instagram book bloggers, for another example of a social-media-exclusive art form that’s developed its own style and format rules, constrained within a program that already has its own rules. 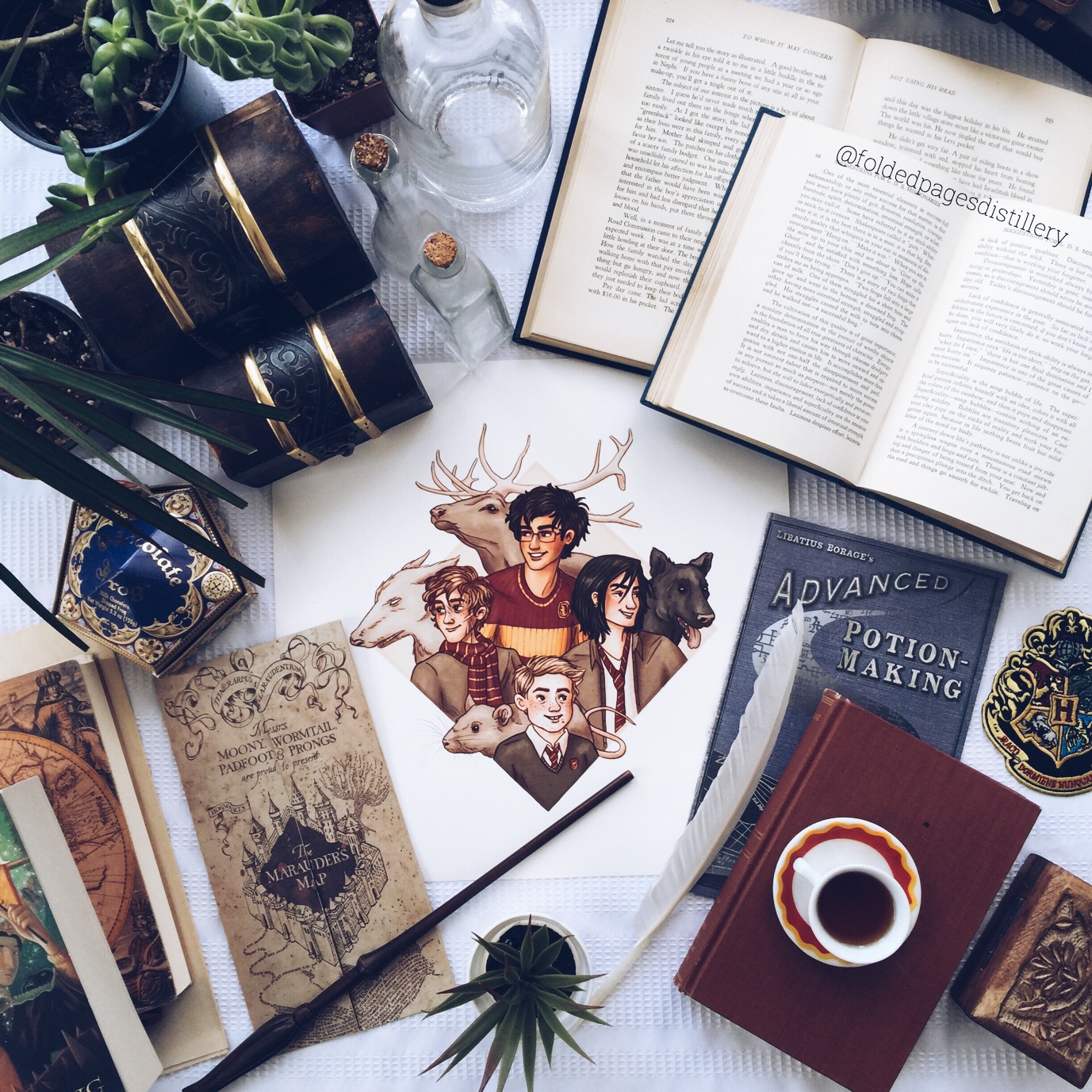 While Bookstagrammers have started to make money or get sponsorship deals from their artful ability to arrange objects into a square photo, and are pretty well recognized within the book world as a current driving force of book buzz, photoset makers…haven’t quite reached the same bracket. A huge portion of this, obviously, is because photosets trade on making pretty pictures of your favorite characters; unless the marketing departments for TV shows are trawling Tumblr for new candidates, then photosets don’t precisely act as a resume. I think there’s also a difference in how we feel about how the art is made. Bookstagrams have achieved fame because photography is a recognized art form; in a great bookstagram, the general principles of good photography are obvious, as well, which makes it easy to point at and say, “only an artistic mind could achieve that.” Contrast that to the photoset creator’s tool, which is…Photoshop. Photoshop is in fact a fairly difficult skill to master, but it’s also most well known for making fashion models look more perfect and for making images meant to fool your grandma in a chain e-mail. While being hard to do, Photoshop and other aspects of visual design are often perceived as being “easy” or something anyone could do. Clients from Hell is full of stories from people who believe that they can make their own website/poster/marketing campaign, and that if they get someone else to do it, then they should be paid very little, or not at all. Paid, degree-holding graphic designers have a hard time being taken seriously, so it shouldn’t be surprising that people with particular skills in making Christ Hemsworth look like he’s staring pensively at a sea get little to no acclaim outside of Tumblr. Despite a lack of formal recognition, or even much recognition of its status as an art form among its own creators, photosets do feel like art. To me, art, especially modern art, is about how I feel when I look at it. I try less to find meaning than to react, and to examine my own reaction to a piece in order to find the meaning it has for me. Most fanworks are aimed at eliciting emotions; fanfictions want you to sigh with the satisfaction of a good read, fanmixes want to put you into a particular mood with music, fanart wants to show you something new that you’ll exclaim over. Photosets do this as well, with pinpoint precision, working to reflect themes of desolation, love, evil, magic, or to create new scenes that, in 10 images or less, make you react. In a way they might be closer to the type of artistic feeling reflected in art museums than other fanworks, because they seek to work with only a moment of your time and a moment of your attention. They’re gallery pieces, hung on the endless blue wall of Tumblr’s scrolling dashboard. And yet, they evolved in a unique niche, growing as a result of Tumblr being the most image-friendly social media platform in the early 2010s, ripe for developing style, design, and aesthetic at a high volume. Twitter’s developed its own photoset function since then, but it gets used in different ways, for different purposes. Instagram’s #bookstagram community remains the closest analogue, as they both involve hours of work for the purpose of presenting a beautifully crafted world to their followers.

We have yet to fully understand how the internet will change society. I personally remember the first computer we had in our house, the sound of dial-up and how long it took pictures to load. The kids who grew up completely in the internet age are only just now entering adult society. Things have already changed to the point where people can make careers out of living their lives on YouTube or Instagram, and people have been able to both start careers and end them with Twitter. In terms of art, the potential of the internet has only just started to come into play, pictures now loading in the blink of an eye. Art has and will continue to emerge into the structures we use to reach out across the wires to each other, and it will only grow with time, ivy clambering in between the bricks of our digital creations. This art is being spearheaded by fans because art and fandom are both about emotions and experiences, about reveling in the highest highs, lowest lows, and contemplating the abstraction of creation. We may very well find that the next few art forms to catch fire in our lives will be envisioned by fans, trying to express just how much The Walking Dead personally destroys them. We may even see the line between fanwork and art blur, as we come to better recognize fanwork as its own form of expression.

With the internet, and with enough passion, the sky really is the limit.

Do you have opinions on this? Share them with me in the comments or on Twitter. If you made one of the pieces featured in this essay and would like it removed, please DM me on said Twitter or shoot me an e-mail at cindymassre@gmail.com