The Brian Azzarello and Cliff Chiang run of Wonder Woman was extremely excellent; I started pulling issues with my local shop towards the climax, and it did not disappoint. It was sad when the writing and art went to Meredith and David Finch, simply because the old run was over, but I figured I could give it a shot. I ended up putting their first issue down and writing them off within a couple of pages, and I’ll tell you why: it was the shower scene.

Now, the issue I’m talking about, Vol 4 #36 of Wonder Woman, has more problems than you can shake a stick at, aside from the shower scene. For one, there’s a bizarre scene with an old crone yelling at all the Amazons about misogyny that sounds like it was written by a man (and it wasn’t!) and a part where Wonder Woman ends up clutching a teddy bear in the pilot of a jet plane. Not her teddy bear, mind you, but it’s still…weird, and infantilizing. These would be bad enough on their own. Using your first issue to have an old woman shriek about “teh menz” while Wonder Woman herself is over-emotional and indecisive is bad enough, but the shower scene really takes the cake.

Screencaps cribbed from The Medium is Not Enough; original images are copyrighted so very hard by DC.

These are the first two pages of the issue, which isn’t surprising. Lazy writers and artists have been starting women’s comic book issues with a shower scene since the dawn of time. It’s not just that this scene is trite, it’s that it chooses to frame Wonder Woman a certain way. Shower scenes are a shorthand for vulnerability. In horror, it means you’re vulnerable enough to get killed; in any genre, stripping naked and contemplating your life under a showerhead shows a softness of character, as well as a liberal sprinkling of sensuality.

Diana may be washing blood from her skin in this scene, but it feels very bland. She spends a page and a half dreamily washing away the blood, while an internal dialogue plays about the cleansing properties of water. After, we see her walking around her apartment, naked, not speaking, until she’s called into the action. It serves as the barest possible opening structure to the story, and honestly, doesn’t achieve much. We see that Diana likes showers. We see that she is capable of nudity. It doesn’t really feel like it has a purpose unless you have a vested interest in looking at her shoulderblades, and you can see those in the rest of the comic, too. Opening with this makes us immediately come to the conclusion that the writer and artist see Diana as soft, sensitive, and sensual, and honestly? That’s not what I read Wonder Woman comics to find. I don’t mind my Wonder Woman having vulnerability, but to me that’s not an important part of the character, and not what I would lead with. Nothing in the rest of the comic contradicts this notion, either–her only fight, with the Swamp Thing, is because she wrongly thinks he’s destroyed a village and she runs at him, flailing her emotions and her fists. It takes men intervening on her behalf to get her out of trouble. And in every panel, her face looks young and unsure. For comparison: what she was doing a few issues prior. This bull dude is probably the least gross creature that she fights in the Azzarello/Chiang run. It’s GREAT.

As a writer, you have an obligation to think about how you’re introducing a character. In my opinion, it should take at most ten pages of the first issue of a run to tell what tone the writer and artist are taking with the comic book, and ideally, it should be done in three. The reader should know right away what they’re getting themselves into, and with longstanding characters, they need to both A) get that sense of tone and B) get the sense that you know what you’re doing. Meredith and David Finch provide A, but not B. Their intro to Wonder Woman directly contradicts what you’ve just spent 35 issues enjoying about the character, and contradicts most modern depictions of the Amazonian. Choosing to start off with showing her gentle side feels like a sucker punch to the nose–surprising, confusing, and unpleasant. Even if the Finches were able to redeem their character choices later, this would still just be a shitty way to segue into their version of the character from what came before.

I’ve been bitter about this for about three years, which is an unfortunate fact about me. However, I didn’t have a blog back then, and so my bitterness has faded over time to an occasional irritation. I was reminded of my bitterness the other day, when I ran across, perhaps, the only good shower scene introduction in comics. Remember how I mentioned that I think a comic should establish itself within three pages? Check out the first three pages of The Sensational She-Hulk 31, written and drawn by John Byrne: She-Hulk and all her adventures are owned by Marvel.

This is a pretty fantastic character intro. We get a read on the character’s personality–sassy, confident. We also get that the comic will feature frequent fourth-wall breaking and unique layouts, which is good to know now. There’s a constant sense of movement, of forward progression–even though we’re getting three pages of a character waking up and showering, it feels like we’re flowing right into the next action, the next excitement. There’s a natural beat to it that makes the reader feel like they’re not wasting their time to read about She-Hulk’s shower.

This scene also takes a setup that normally turns comic book women into passive eye candy and allows She-Hulk to control the scene. There’s a debate about how empowered a fictional character’s sexuality can be when it’s her creators deciding that she’s going to fight crime in heels; but here, John Byrne gives She-Hulk the opportunity to assert herself to her creator and reader. The shower scene doesn’t lack sensuality, but it allows the character to tell us how much she does and doesn’t want us to see. She’s still fictional, but the fact that John Byrne is weaving the illusion that she has power over him, as opposed to vice versa, is a really interesting turn-around. It makes the scene feel active, instead of passive, and adds to the energy of the scene. 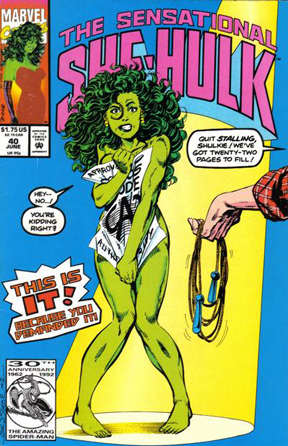 Obligatory disclaimer: John Byrne’s work is often…less feminist. But I kind of adore that she’s covering her naughty bits with the Comics Code Authority label.

I love this scene. I love that John Byrne exploded the fourth wall not only by having She-Hulk address her author/artist, but by turning the traditional sexy shower scene upside down. She-Hulk is placed in a situation usually used to put comic book women in a box–to establish them as vulnerable, sexy, to put them on display to the reader. John Byrne allows She-Hulk to get both hands around the issue and control it to her benefit. She’s still very sexy–we see more of her exposed than Wonder Woman–but the way the scene is framed as being within her power makes a league of difference in how this scene feels. It’s immediately fun, immediately engaging, and doesn’t piss off the female portion of the audience. It’s an ideal introduction, an ideal deconstruction, and an ideal other comics should work toward.

How do you feel about women showering in fiction? Tell me about it in the comments or on Twitter!